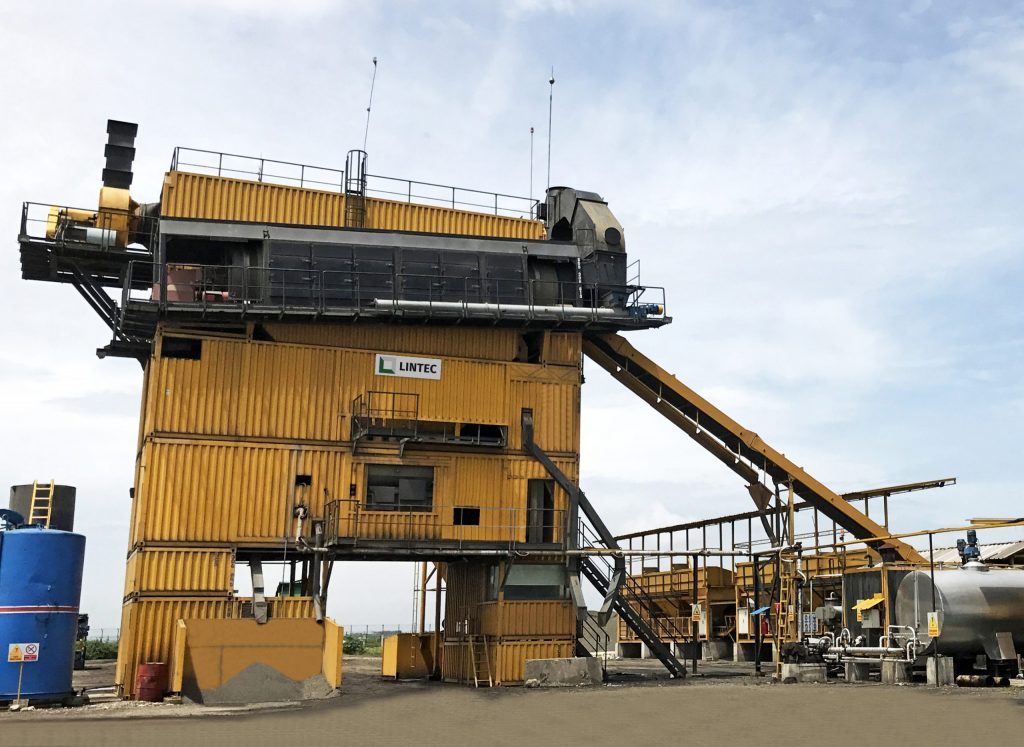 The Lintec CSD3000 Asphalt Mixing Plant supplied more than 50,000 tons of hot mix asphalt for the construction of the Mandalika street circuit.

International motorcycle racing has returned to Indonesia after a 24-year hiatus. A Lintec CSD3000 containerised asphalt plant, the largest mixing plant in the country, has been key to producing its new, premium-quality, racetrack in record time. Two units of Linnhoff TSD1500 MobileMix asphalt plants were also deployed to produce the asphalt mix for the run-off areas.

The construction work on the 4.31 km Pertamina Mandalika International Street Circuit on Lombok Island’s southern coast began in June 2020, as part of the Indonesian government’s campaign to promote new international tourist destinations. Paving works began in February till August 2021, with the entire project completed by October 2021. The circuit was ready to host its first race – the finale of the FIM Superbike World Championship (WorldSBK) season – during November 19-21. 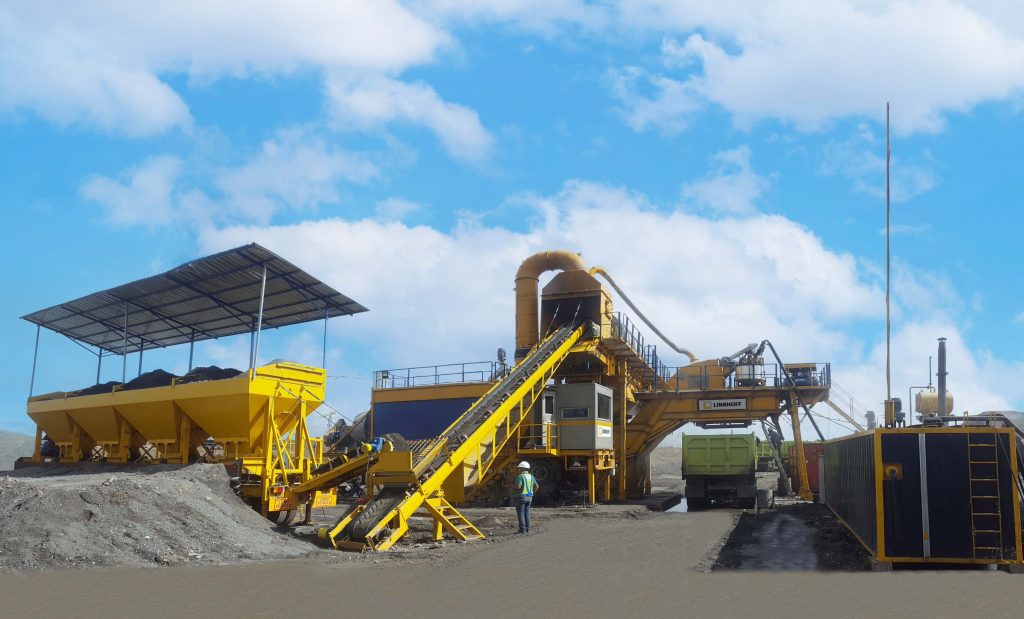 Two Linnhoff TSD1500 MobileMix asphalt plants produced 90-100 tonnes of hot mix asphalt per hour, and were primarily used for the run-off areas around the main track.

As the resort area of Mandalika forges ahead with its multi-billion dollar transformation into a luxury coastal resort worthy of rivalling nearby Bali, the track will become the only street circuit in the prestigious MotoGP calendar functioning as an ordinary road when no events are scheduled.

The surface layer is specially paved using special Stone Mastic Asphalt (SMA) mixture, which combines the famously tough coarse aggregate Tau stone from Palu, Central Sulawesi, with Performance Grade (PG) 82 polymer-modified bitumen (PMB). Also added was limestone filler from Ponorogo and Probolinggo, East Java, and cellulose fiber additives from Germany, only the highest-quality materials were used. By strengthening the structure of the surface layer so that it remains strong through stone-by-stone contact, its high cohesive strength provides greater resistance to intense heat and heavy loads. Additionally, by remaining non-slippery in wet conditions, this mix is especially suitable for racetracks in tropical regions.

With its well-earned reputation for effective screening, accurate weighing, proper and efficient drying, and a production output of up to 240 tons per hour, the Lintec CSD3000 plant was therefore the obvious choice. The high capacity asphalt plant was chosen to minimise the paving joints for a smoother race track surface. With the PG 82 PMB providing improved workability of asphalt mixtures, it was imperative that the contractors used an asphalt mixing plant that could be relied upon to provide homogeneous output to ensure a reliable production capacity of the optimum mix.

It produced a total of over 50,000 tons of hot mix asphalt for the three layers of the main track; namely the Asphalt Concrete (AC) base layer, AC binder layer, and the SMA surface layer.

“The contractors appreciated the consistent quality of the finished mix,” explained Teo Siang Leong, General Manager (Sales), Lintec & Linnhoff Asphalt Pte Ltd. “And, because of our unique double screen drum technology, they benefited from considerable energy savings as there is no hot elevator or vibrating screens – this also resulted in higher reliability and required less maintenance work.” 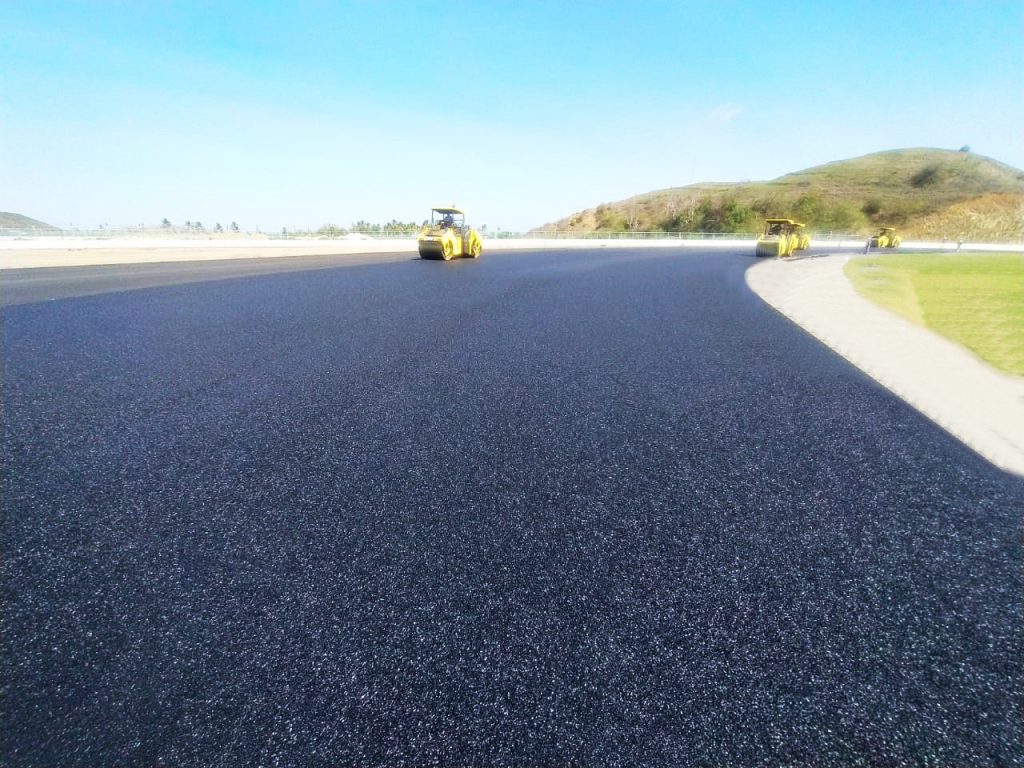 Stone Mastic Asphalt (SMA) was used to pave the surface layer of the street circuit, making it less slippery and more resistant to intense heat and heavy loads.

As the first asphalt mixing plant of this size to be used in Indonesia, the Lintec CSD3000’s innovative modular construction (the entire plant is built inside ISO shipping containers for safe, economical transportation) allowed for fast installation and commissioning after arriving on the jobsite.

The Lintec CSD3000 was also joined by two Linnhoff TSD1500 MobileMix asphalt plants. These mid-size models of the range, produced an impressive 90-100 tons of hot mix asphalt per hour, and were primarily used for the run-off areas around the main track.

These areas also play host to a large paddock area containing 40 garages, along with temporary grandstand seating for 50,000 fans and 7,700-person-capacity hospitality suites, all of which will be removed at the end of each race schedule. There is also a standing tribune area catering for 138,000 spectators. 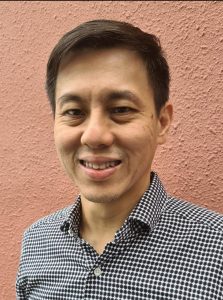 “And, because of our unique double screen drum technology, they benefited from considerable energy savings as there is no hot elevator or vibrating screens – this also resulted in higher reliability and required less maintenance work.”

Operated by the Mandalika Grand Prix Association (MGPA), the generally flat circuit features 17 turns – many of them medium- or high-speed – with just a few hard braking areas. The picturesque coastal scenery is exploited to the full, with the entire course surrounded by panoramic views on all sides and several of its corners being within spitting distance of the beautiful beach.

A bird’s eye view of the circuit while it was under construction can be seen here, and a CGI rider’s view here.