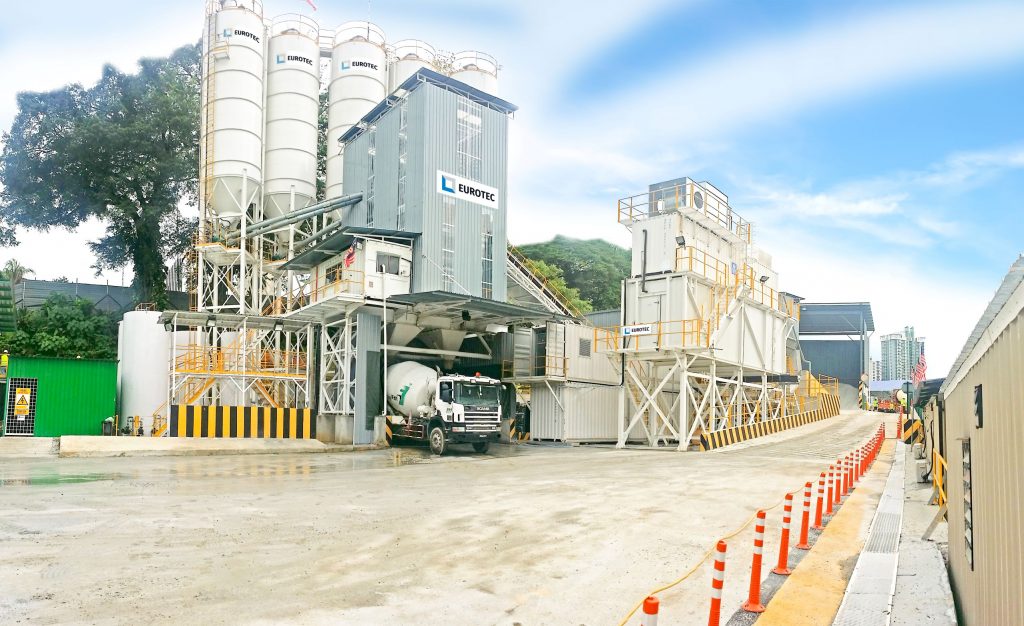 A new iconic landmark is taking shape on the skyline of Kuala Lumpur, Malaysia, and a Eurotec concrete batching plant plus flake ice plant are working in tandem to ensure the project remains on course to meet its revised completion date.

One of the first challenges for Lintec & Linnhoff Concrete on this high-profile jobsite was installing the Eurotec MZ 6750Ti, together with the flake ice plant within the tight confines of the downtown location. To do this the company had to make some key modifications to meet the space constraints, while simultaneously ensuring the plant’s high production rate remained unaffected. 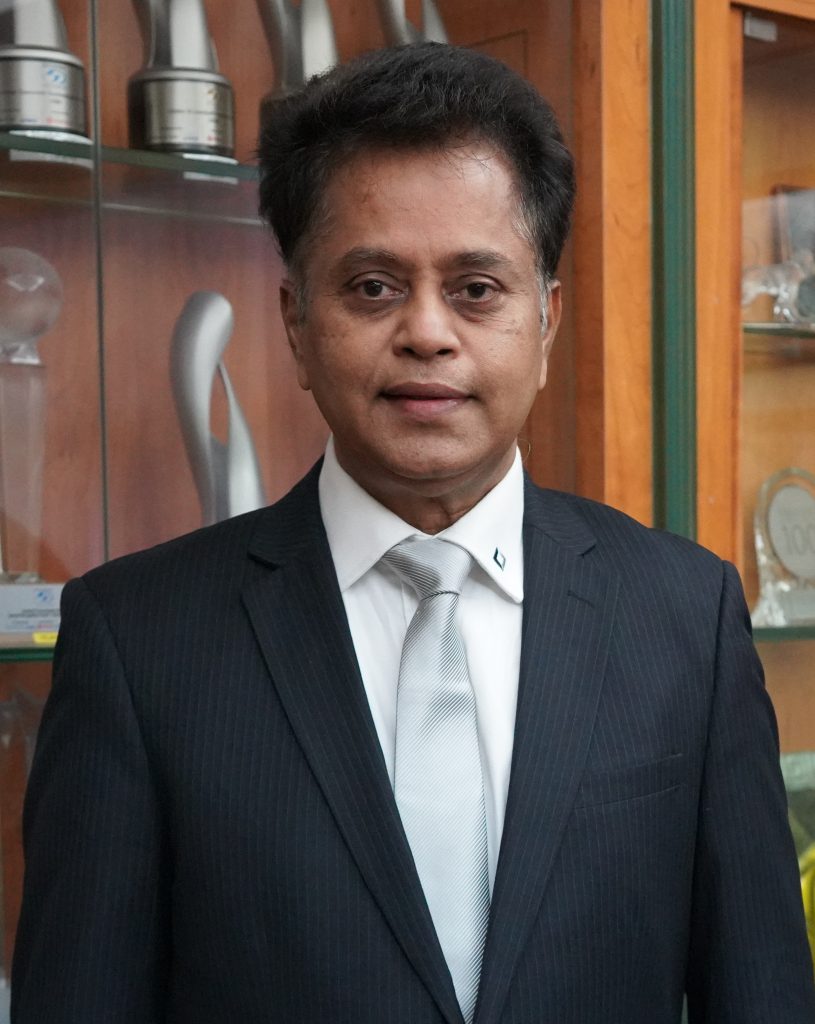 “Despite the challenges, our in-house design team came up with a customised engineering solution that met all of our customer’s requirements. The size and number of the cement-weighing hoppers was increased to produce high grade concrete based on the customer’s mix recipe. In addition, there were four geardrives attached to the shafts of the concrete mixer to enable the plant to handle high-grade concrete with maximum productivity. These customisations ultimately increased the plant’s efficiency, and improved the consistency of the concrete while maintaining its homogeneity. It also means the plant is able to produce top-grade M105 concrete.”

One of the initial tasks for the Eurotec MZ 6750Ti was mixing concrete for the 118-story tower’s foundations. This required pouring 137 reinforced concrete bored piles, each measuring 60 m deep and 2.2 m in diameter. To optimize this mammoth task, the Eurotec plant worked in near continuous operation. This set the tone for the rest of construction, which has continued at a high pace since construction began in 2014.

One distinctive feature of the building design is the use of an 800 mm-thick, 76 m-diameter cofferdam wall as an embedded retaining system. This enabled 17 m of obstruction-free excavation down to the pile cut-off level and creating this intelligent feature required the supply of a large amount of high-quality concrete.

“The Eurotec Concrete Plant plant is still running at high capacity, typically producing anything up to 200 m3 of concrete per hour to serve the project,” said R. Sakthi. “This is now largely being produced for the upper levels of the development as it progresses through the latter stages of construction.”

Working alongside the Eurotec MZ 6750Ti to keep the project on track is one of the company’s flake ice plants, which has the capability to produce anything from 10 t to 40 t per day. Flake ice has low surface moisture and a thin profile which neither sticks nor forms blocks during transportation. This is critical for trouble free delivery to the mixing plant. The dosed ice also maintains the temperature of the poured concrete within the design limits required during the curing process. This not only allows for faster pouring but most critically ensures that the concrete used in the Merdeka 118 development cures to the desired strength and quality.

“Having the ice plant is an important part of keeping such a large construction project on schedule and moving forward to the highest quality standards,” continued R. Sakthi. “In the hot climate of Kuala Lumpur, our high quality flake ice from the plant is able to mix quickly and completely with the concrete. There is no delay in mixing time and no large ice particles introduced into the mix that can otherwise cause voids or quality issues with the concrete. Both the Eurotec MZ 6750Ti and the flake ice plant haven’t missed a beat in five years of operation which is a great testament to their productivity and reliability.” 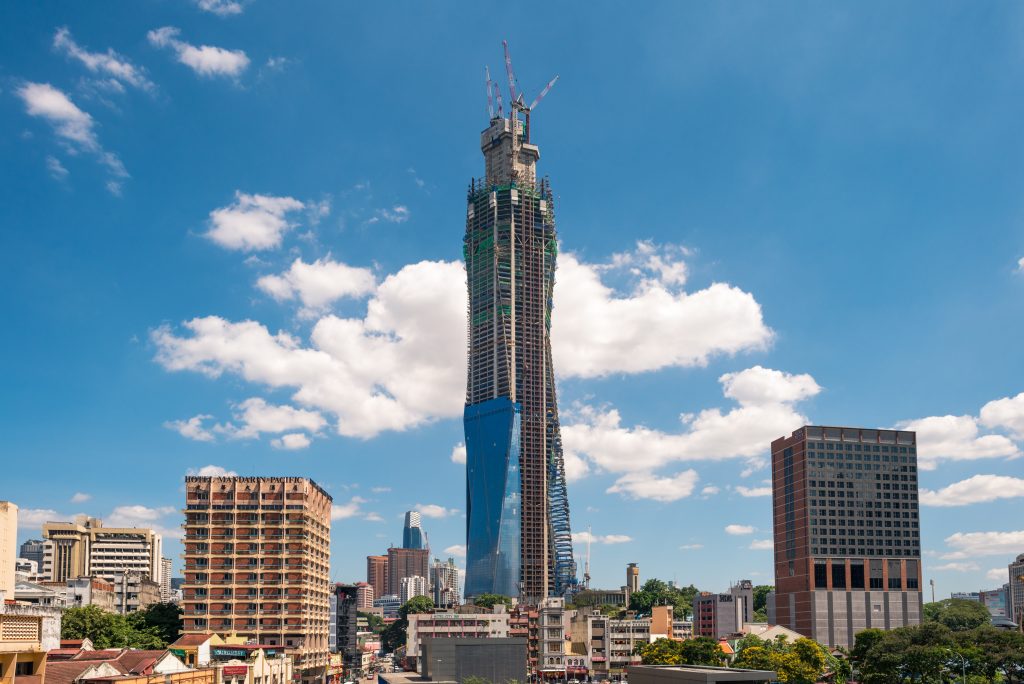 The mixed-development project stands on 19 acres near several of Kuala Lumpur’s historically important landmarks, including Stadium Merdeka, where independence was declared in 1957. The tower reflects that concept in both name – Merdeka being Malay for ‘independent’ or ‘free’ – and design, with its off-centre spire being inspired by the iconic photograph of Malaysia’s founding father Tunku Abdul Rahman and his raised right hand from that famous day.

The project was originally scheduled for completion late last year but was hit by Covid-19 shutdowns that have unsurprisingly pushed back completion to Q2 of 2022. Of its 118 stories that provide 292,000 m2 of floor space, 83 will be devoted to office use, being situated below the 16 floors of the planned six-star Park Hyatt hotel, and the dual-level observation deck and restaurant.

Designed by Australian architects Fender Katsalidis for PNB Merdeka Ventures Sdn Berhad, the RM5 billion (US$1.2 billion) development will be the first in Malaysia to satisfy the triple green building platinum index accreditations locally and internationally. Phase 3 of the development, which will conclude the project, will see the construction of three separate residential towers scheduled for 2024/2025.